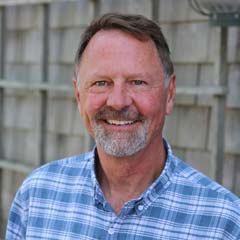 Richard grew up in Hingham, MA and first came to the island in 1976, where he resided in the front seat of a station wagon for two weeks before finding an attic room in a guesthouse on Cliff road. Yes, housing was an issue back then as well.

Following his graduation from Babson College, he returned to the island to help a close friend and his family run the Sweet Shop on Main Street (now Met on Main). The first waitress he hired that summer would become his wife, 11 years later.

The following year, Richard started his career with Ford Motor Company. Relocating 11 times over a 30-year period, he gained first hand knowledge of buying, renting, and selling houses around the world.

Richard and his wife were married in 1994 at the Sconset chapel with a reception at the Chanticleer – priceless!

In 1998, while working as the Ford Managing Director of Puerto Rico and the U.S. Virgin Islands, he and his family flew to Nantucket and spent their time viewing houses with Cindy Lenhart of Compass Rose. By the end of their stay, they had found and purchased a house in Surfside with a peek of the ocean and a magical path to Fisherman’s beach.

Over the years, the Nantucket house became known as “base camp” to Richard’s 3 sons. A place they could always call home. A place they would return to every summer.

In 2002 Richard accepted a position as Managing Director of Ford New Zealand and became involved in sprint triathlons. He has participated in three Nantucket Triathlons over the years (including the legendary swim against the tide). Although his times were a bit on the pathetic side – he did finish all 3 of the triathlons (barely).

Earlier this year, Richard moved to Nantucket to work on his house and fulfill a life-long dream of helping others find their “foot hold” on the island. He is honored to be a part of the Compass Rose Real Estate team.

Richard has a BS degree from Babson College, and an MBA from Northeastern University.